Skip to content
John Adams’ term as President is not a high point of American history. In fact, with the Alien and Sedition Acts, he and the Federalists managed to pass some of the most un-American legislation in history. Forget four score and seven years, the Federalists could not wait twenty years before they tried to create a dictatorship.
The Alien and Sedition Acts essentially allowed John Adams to imprison or fine any one he wanted. Specifically, the Sedition Act allowed the President to imprison or fine anyone who criticized the government. The Alien Acts allowed for the imprisonment or fining of anyone born in another country. The Naturalization Act, which is also lumped in with this other nonsense, raised the years of residency from five to fourteen in order to become a citizen of the country.
The Federalists claimed that new immigrants were harming the country. European radicals were coming to America to start the next French Revolution! As one oft quoted though stubbornly anonymous congressional Federalist is said to have exclaimed that there was no need to “invite hordes of Wild Irishmen, not the turbulent and disorderly of all the world to come here with a basic view to distract our tranquility.”[i] The truth of course was that new immigrants had proven more likely to vote for the Democratic-Republican party and the Federalists had to do something about the erosion of their power.
So why was this attempt to discourage immigration so un-American? Let’s take a look at the Declaration of Independence. You know the document that John Adams supposedly helped to write? Although the fact that he signed these Acts into law makes one wonder if he ever even read it. After you get past the Life, Liberty and Pursuit of Happiness part, the Declaration becomes a list of complaints against King George III. One of them reads as follows:
“He has endeavoured to prevent the population of these States; for that purpose obstructing the Laws for Naturalization of Foreigners; refusing to pass others to encourage their migrations hither, and raising the conditions of new Appropriations of Lands.”
To put it simply, the idea the immigrants are welcome here, necessary here, is one of the founding principles of the United States of America. Unanimous, indisputable, right there on the parchment.
When the Alien Friends Act was read before Congress in May of1798, Edward Livingston gave it a stinging, three-hour long rebuke on the floor. Newspaper accounts of his speech would take up ten full columns. This earned him the scorn of Abigail Adams who wrote; “we want more Men of Deeds, and fewer of Words.”[ii]Of course the Adams had hated the Livingstons for more than two decades at this point and Abigail was always quick to defend her husband. 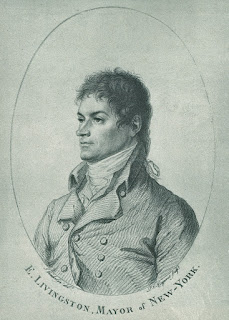 And he did need defending. In the speech Edward Livingston called out the Federalist party for trying to “complete the picture of tyranny” by giving John Adams the power to dispose of his enemies with no oversight. Several journalists were imprisoned or fined under the Sedition Act for criticizing Adams’ administration. The Alien Act would allow him to do the same to others based solely on their place of birth and the President’s “present interest or passion”

Having shown over the course of his three-hour lecture that the bill was “at war with the fundamental principles of our government” Livingston and the other Democratic-Republicans could only hope they had swayed enough of the majority Federalists that the bill would not move forward. They had not and the bill moved on and was eventually signed into law.
What were the implications of this? In the short term, John Adams lost his

reelection bid in 1800 making him the first president voted out of office for attempted despotism. Thomas Jefferson became president and most of the acts were allowed to expire. The imprisoned were released and fines were eventually returned.

The Alien Enemies Act languished on the books for more than a century. Then another particularly virulent cycle of xenophobia hit, and the Act was dusted off by Franklin Delano Roosevelt during World War II. He used it to round up Japanese Americans and Japanese immigrants and put them in concentration camps. This action has been almost universally condemned.
It is a sad fact that throughout the history of the United States of America fearmongers have used the threat of a dangerous “other” to garner more power for themselves. America has always been fortunate though that there have been good people to stand up and fight when xenophobes try to seize power.
[i] This quote appears in almost all articles about the Alien and Sedition Acts but I have been unable to identify the speaker as of yet. Does any one have any more information?