Acer Sacharinum, The sugar maple tree. Every year, about this time, thousands of Sugar Maples are tapped so that the sap can be collected. Boiled it becomes syrup or even maple sugar. And there for a very brief time in the early 1790’s intersected abolitionists, land speculators and entrepreneurs.

Dr. Benjamin Rush was an ardent abolitionist. He was also one of the most ardent supporters of the maple sugar. In an address read before the American Philosophical Society on August 19, 1791 Rush espoused the benefits of maple sugar. Each sugar maple could produce twenty to thirty gallons of sap which could be boiled down to five or six pounds of maple sugar. Some families had produced up to 600 pounds of sugar a year using just the family labor. And for all intents and purposes the sugar was as good if not better than the sugar that came from the West Indies. Rush even conducted an “experiment” where he, Alexander Hamilton, a merchant by the name of Henry Drinker and several ladies tasted tea and coffee sweetened with cane sugar and maple sugar. It was unanimous that they could not tell the difference.[i]

And that was the key for Rush. If Americans could make their own sugar, for their own consumption and for export, people would become less dependent on West Indies sugar and the need for enslaved people would decrease there. He got many people on his side, the Quakers who were very much against slavery were in favor of the plan to end enslavement in the harsh conditions of the West Indies. He also got Thomas Jefferson and George Washington on his side.[ii]

In the midst of this growing interest of maple sugar, Janet Livingston Montgomery sent a sample of the sugar to Edward Newenham, a member of the Irish Parliament who she had met on her trip to Ireland in 1790. In a letter to George Washington, Newenham admitted the product was good and that if it could be commercialized would be a boon to the American economy but doubted New York could produce enough of the sugar to be effective.[iii]

Washington replied that the manufacture of maple sugar was promising because the sugar maple tree grew in several states and that there was no reason to doubt the production of the sugar would not be profitable.[iv]

Another great proponent of the maple sugar craze was William Cooper, founder of Cooperstown

and father of James Fenimore Cooper. In fact Alexander Hamilton thought no one could shed more light on the subject of maple sugar production than William Cooper.[v]He thought that the desire for maple sugar would bring more people to his land grant and he could make money selling land to the settlers moving west. He also produced his own sugar. In 1791 he expected to bring in £3,000 worth of sugar to market himself alone. For the anti-alcohol groups it was also said that less profit could be made by turning maple sugar into liquor than selling it as sugar so people were less likely to distill it. Although Thomas Jefferson thought that the liquor produced tasted exactly like whiskey.[vi]

America was now fully in the midst of a maple sugar bubble. Benjamin Rush even formed the Pennsylvania Company of Quakers to produce maple sugar. Thomas Jefferson had more than 60 maple trees planted on the property at Monticello. It was expected that even with domestic consumption the yearly export of maple sugar would be worth at least $1,000,000.

Then the bubble burst. Several maple sugar venture in New York failed. William Cooper found that people were not willing to move to the wilderness just to produce maple sugar. Rush’s company went bust, in debt for £1,400. Supply had outstripped demand, leaving the entrepreneurs and land speculators holding the bag. As for the abolitionists, they were disappointed that maple sugar had not been able to put the sugar islands and their associated enslavement, out of business.[vii]

From beginning to end the maple sugar bubble lasted about three years, from 1791 and 1794. Everyone was disappointed, except for those who like the flavor of maple. Thousands of trees are still tapped every year and their sap boiled down for maple syrup and even a little maple sugar. Perhaps next time you take a bite of syrup covered pancakes you’ll think of Benjamin Rush and his attempt to use maple trees as a way to end slavery in the West Indies. 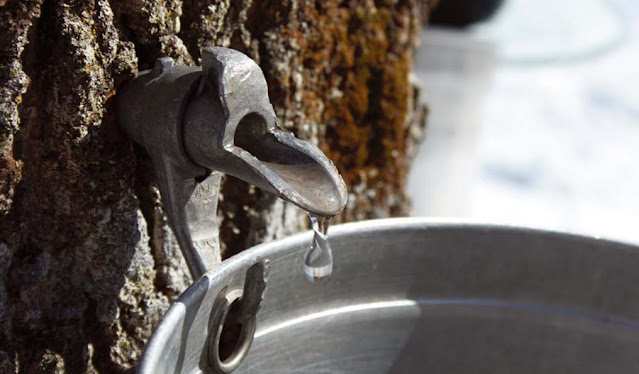 [i] Rush, Benjamin An account of the sugar maple-tree, of the United States, and of the methods of obtaining sugar from it, together with observations upon the advantages both public and private of this sugar. : In a letter to Thomas Jefferson, Esq. secretary of state of the United States, and one of the vice presidents of the American Philosophical Society. : Read in the American Philosophical Society, on the 19, of August, 1791, and extracted from the third volume of their Transactions now in the press. / By Benjamin Rush, M.D. Professor of the institutes and of clinical medicine in the University of Pennsylvania. http://name.umdl.umich.edu/N19030.0001.001accessed 3/3/21