Many British and German soldiers stayed in America when the Revolutionary War was over. Some deserted from their regiments to take up a life in America or, in the case of officers, resigned their commissions to stay in the new United States. The prospect of land or relationships with women were too strong a pull for some of the men to return to their homelands.

general Horatio Gates after the Battles of Saratoga. The Convention Army, as it became known, was marched from Saratoga to Kinderhook, NY and then east toward Boston and later to Pennsylvania.

At some point in that journey a British soldier named Richard Dickinson slipped away from the army. By 1783 he had married and had a child. They were living as tenants on Henry Beekman Livingston’s land. All seemed to be going well for Dickinson until he was in a tavern one night and a stranger bought him too many drinks. When Dickinson came out of his drunken stupor, he found himself enlisted in Captain Conner’s company of Marinus
Willets Regiment of State Levies and on his way to the frontier.

His family appealed to Henry Beekman Livingston to obtain his discharge. Livingston wrote to Willet and Governor George Clinton to no avail so he finally wrote to George Washington to see if he could obtain Dickinson’s release.[i]

discharged soon. He also issued orders to Col. Willet to release Dickinson if he found that the recruiting officer had done anything shady in enlisting him. It is unclear when Dickinson was discharged.[ii] 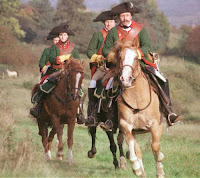 Frederick Augustus de Zeng was a Hessian cavalry officer who was born in Dresden in 1756. He joined the army of Hesse-Cassel in 1774. In

1780 he was sent to America in one of the regiments rented to the British. When the war ended in 1783 de Zeng resigned his commission. He had fallen in love with Mary Lawrence of Queens.

The pair were married and moved to Red Hook, NY probably because de Zeng felt comfortable in the large German community, the descendants of Palatine refugees, in the area. de Zeng was always on the

move though. Always looking for a way to gain wealth. He was naturalized in 1789 and by 1792 had moved to Ulster County to land that was owned by Chancellor Robert Livingston. In 1792 he was named major of the Ulster County militia.

Again, de Zeng was always looking for a new deal. In 1796 he invested in a window making business in Albany. In 1798 during the Quasi -War with France he wrote to Alexander Hamilton to offer his services as a soldier to his “adopted country.” He listed his fifteen years of experience and offered to command or at least train mounted troops for America. He offered to do this without taking any payment, although being a gentleman he could do nothing less. It would be uncouth to ask for money.[iii]

de Zeng continued to work his way west in the state. Along the way he and Mary had five children. de Zeng became very involved in the evolution of canals in New York including the Chemung Canal. He also owned a bridge over the Susquehanna River.

de Zeng lived until 1838 finally dying in the town of Clyde in Wayne County, New York near the Finger Lakes region, 4,021 miles from his birthplace.

Dickinson and de Zeng are only two examples of the hundreds of enemy combatants who stayed in America after the Revolutionary War. These two men made the best of the opportunity the new country gave them as did many of their peers.