It would be tough to decide which members of the Livingston family had the worse Christmas in 1777. Chancellor Robert R. Livingston had suffered the destruction of his house by the British Army and was forced to take Christmas dinner at his cousin Peter R. Livingston’s house. Margaret Beekman Livingston, who had also lost her home to the British was in Connecticut staying at a house that belonged to Robert Livingston, 3rdLord of Livingston Manor. On the other hand, Henry Beekman Livingston was settling in to his winter quarters with the Continental Army at Valley Forge, Pennsylvania.

After being briefly held by the British as a quasi-prisoner of war in November of 1777 Henry rejoined his regiment, the 4thNew York, in time to join them in winter quarters. On December 24, 1777 Henry, had written to his brother Robert; “We are now building huts for our winter quarters without tools or nails so I suppose we may render ourselves very comfortable by the time winter is over.” He went on to explain that his men were \”in general mostly naked and very often in a starving condition.\” He and his troops were lousy with bugs and only 18 men could muster fully clothed, the rest missing shoes, stockings, coats or breeches[i] 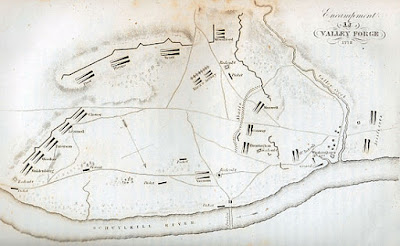 Christmas Day did not show much improvement for the men in Valley Forge. George Washington’s general orders to the army begin with order 9 men from each brigade and three wagons to be assigned “for the purpose of collecting flour, grain, cattle and pork, for the army.” They end with a warning against plundering the local inhabitants and that anyone caught was to be “severely punished.”[ii]This would seem to indicate a shortage of food and possibly other supplies in the camp.

Henry wrote to Governor George Clinton of New York that day. He wrote; “Wholly destitute of clothing, the men and officers are now perishing in the field at this season of the year, and that at a time when troops of almost every other state are receiving supplies of everything necessary and comfortable.”[iii]

Harry and his men made it through Christmas though many of them would fall sick over the course of the winter. Henry himself fell so ill he had to be removed from the camp to a private house several miles away. He soon recovered though, boasting, in a letter to George Washington, that he had “never been sick before in My Life that I shall be enabled to return to my Duty in a few days.”[iv]

It turned out that it would take Henry six weeks to recover. By the end of March 1778 he was back in camp with his regiment learning how to be a real soldier. Over the next few months Henry and his men trained extensively under the Baron von Steuben who Henry described as \”an agreeable man\”. Henry found the training \”more agreeable to the dictates of reason and common sense than any mode I have before seen,\”[v]
In June of 1778 Henry Beekman Livingston, the 4th New York and the entire Continental Army emerged from their winter quarters at Valley Forge transformed. They were an army that could stand in the field against the British Army . Still though, Christmas 1777 was pretty bad.