On December 31, 1775 General Richard Montgomery, husband of Janet Livingston, led a desperate attack on the British held city of Quebec.  Leading one of three wings of the attack Montgomery found the first barrier he and his men faced undefended.  He crossed with many of his sections officers and waited while a detachment of soldiers began tearing down the barrier to allow the main body of troops through.  Suddenly at the end of the street Montgomery noticed movement in a fortified blockhouse.  He knew well that the narrow street his men were using to enter the city would become a slaughterhouse if the defenders were able to fire a canon down the street from the blockhouse.  He drew his sword and charged the house with his officers hoping to catch the defenders off guard.  Unfortunately, the defending British and Canadians were not asleep and their canon spat grapeshot at the advancing Americans.  Most of the officers fell, Montgomery had been hit by three balls, in the leg, groin and head.  He died instantly.

The attack on Quebec fell apart but the American army would stay around the city under the command of Benedict Arnold for several more months before a fighting retreat down Lake Champlain.  Montgomery was a wealthy man, an experienced campaigner and had plenty of time to prepare for the campaign in New York, Livingston Manor and Albany so he was well equipped. So what happened to his stuff? 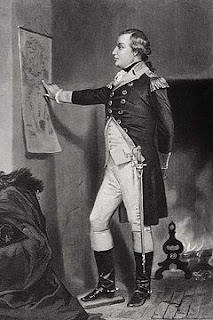 His money, in various denominations was inventoried on January 2, 1776 to be sent back to New York.  It amounted to a little over £ 347.  In addition his watch and seal were recovered from his body and sent to the Americans and then back to Mrs. Montgomery.  The General himself was buried in Quebec with full military honors.  In 1818 his body was returned to New York.
The next day January 3, 1776 his personal effects were inventoried and, as was the custom of the time, they were auctioned off with the money being sent to his widow.  This custom may seem morbid but it allowed the other officers a way to resupply themselves on campaign and in many cases the money would be far more useful to the widow than her deceased husband’s shirts.  The officers who performed the inventory of Montgomery’s goods were Colonel Donald Campbell, Major John Brown, Major Fred Weisenfelts and Aide-de-Camp Aaron Burr.

The single largest buyer at the auction was Benedict Arnold.  His purchases included 3 ruffled shirts and six plain shirts, six cambric stocks, a silk neck cloth and three linen handkerchiefs.  Arnold also purchased a pair of “casimere” (perhaps cashmere) breeches and matching waistcoat which were probably quite comfortable in the cold Canadian winter.  Interestingly Arnold also purchased a pair of moccasins and “elegant Indian leggins”.  Because they are described as “Indian” the leggings were most likely leather, worn to protect one’s stockings from being destroyed when walking through the woods. 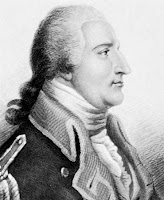 Arnold (at right) also purchased a dozen knives and forks, six silver table spoons, six silver tea spoons and a pair of tea tongs.  He also purchased five table cloths and an old trunk for storage.  Silver spoons and table ware may seem fancy for a military campaign but it was important for Montgomery’s reputation that he be able to entertain his officers and if necessary enemy officers in high style.
Among the other items sold from Montgomery’s possessions were two blankets and a counterpane (bed spread) sold to Colonel Seth Warner.  Aaron Burr bought a clothes brush, which was used for keeping his uniform looking clean and presentable.  In addition a pair of woolen stockings was given to Dick, described in the inventory simply as “the negro boy”, most likely a slave.  His sheets were sent to the hospital to be used for the wounded.
There was a surprising amount of stuff not sold at the auction, especially considering that Arnold and his men had lost almost all their possessions on their march into Canada.  Among the unsold items were three more ruffled shirts, six muslin neck cloths, fifteen pairs of stockings of various materials, five pairs of breeches, two waistcoats and two cotton caps, shoes, gloves, a watch coat, his mattress and pillows.

Montgomery also had a small library with him which was not sold.  The titles included; Reveries on the Art of War by Maurice De Saxe, two volumes by Polybius, a Greek historian, L\’Ingenieur de Campagne by Clarac (a book on military engineering),  four volumes of La Science Militaire and Johnson’s English Dictionary.  These books show Montgomery to be a serious student of military tactics and not someone who was willing to rest simply on the knowledge he had already gained.
One thing that is not listed on the inventory are any personal letters. He did correspond with Janet Montgomery during the campaign and his letters to her have survived, at least in transcribed form but none of hers to him survive.  It is believed that Montgomery took the prudent step of burning the letters after he had read them.  This would prevent the enemy from gaining any intelligence from them should he be captured.

All in all the inventory of Montgomery’s personal goods gives us a good idea of the type of man the Montgomery was.  He was a man fully dedicated to the cause; nothing in the inventory obviously indicated his life with Janet.  Everything he carried was what was viewed as necessary for an eighteenth century military officer on campaign.  Nothing more to remember his life at home and nothing less, which could have lowered other opinions of him.