Of Judge Robert R. Livingston’s four sons John R. Livingston is perhaps the most forgotten. His oldest brother Robert helped to found this country. His next brother Henry found success as a soldier. Even his younger brother was a famous politician, serving in congress and on Andrew Jackson’s cabinet. But John is typically known merely as a merchant.

John was born in 1754. He was the third son of Judge Robert R. Livingston and Margaret Beekman Livingston, and their seventh child overall. When the Revolutionary War broke out John served briefly under his brother-in-law, Richard Montgomery’s command during the expedition against Canada in 1775. He also served briefly at Fort Edward during the summer of 1777.

Most of John’s time during the war was spent as a merchant. In 1776 he took over his father’s gun powder mill and soon built a second to supply gunpowder to the army. He spent a great deal of time in Boston during the war, buying and selling various war materials.
But what if there was more to young John? What if he had a cruel streak like his brother Henry? 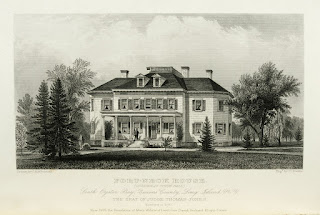 In 1879 a nearly century old manuscript was published by the New-York Historical Society as A History of New York during the Revolutionary War, and of Leading Events in Other Colonies at That Period. It contained the following disturbing passage:
When the news of the unlucky affair at Trenton arrived at New York, Erasmus Phillips, Esq., Captain of Grenadiers in the 45thRegiment, was there. He immediately set off to join his regiment in Jersey. He was attended by a servant only. As he passed through Princeton he was observed by three persons who were concealed in a house at that place. The house stood upon the road. The Captain was to pass the door. When he came directly opposite, the three assassins fired, and lodged three bullets in his body. He instantly fell from his horse dead. The servant escaped. One of the party who committed the murder, his name shall be mentioned, was a John Livingston, one of the sons of Robert R. Livingston, late one of the Judges of the Supreme Court of the province of New York. This barbarian, in public company, in Middletown, in Connecticut, boasted of this murder as an act of heroism, a noble achievement; and so little remorse had he for his cruel act in which he had taken a principal part that he declared “That Captain Phillips made one of the handsomest corpses he had ever beheld. We stripped him “says he “of all of his clothes and left him naked in the street. I thought” added he “that I should have been obliged to have cut his head off, to get at his diamond stock buckle, but I effected my purpose by breaking his neck, and turning his head topsy-turvy.” This he concluded with a broad laugh, taking off his own stock, and saying, “Behold the buckle, it was worth the pains of breaking a dead man’s neck for.”
Whoa.

Let’s look first at the dead man. Captain Phillips was a captain in the 35th Regiment of Foot, not the 45th. In a history of the regiment compiled in 1873 he is listed as murdered on January 2, 1777 “by some of the country people apparently” although other sources list him as having died the next day at the Battle of Princeton. His will was executed in July of that year and is in the collection of New York Historical. So he definitely existed and died although the how is still in the air.
As for John, while he would certainly not be called scrupulous, he does not seem to have been a killer. His business deals often trended toward shady but I could not find any contemporary evidence that he was accused of murder in 1777. He traveled to Rhode Island in late 1776 on a business trip but it seems unlikely that he would have been in Princeton, a British-held town, on January 2 in order to murder Phillips. Also, as Princeton was garrisoned by the British army it seems unlikely that the three shots that killed Phillips would have gone uninvestigated long enough to strip the dead man and break his neck.

So where does this accusation come from? Thomas Jones, the author of A History of New York during the Revolutionary War, was a loyalist who prior to the war had been a Supreme Court Judge along with Judge Robert R. Livingston. In 1779 the Act of Attainder stripped Jones of all his land on Long Island and forced him to flee to England along with his wife. His wife, by the way, was Anna DeLancey of the DeLancey family who had been bitter political opponents of the Livingston family for years. So Jones is perhaps not the most unbiased source. In the same book he referred to Chancellor Robert R. Livingston as a “violent partisan”.

There is one more twist in the publication of the manuscript. The editor in 1873 was Edward Floyd DeLancey, a descendant of the same rival family.
Did John R. Livingston murder a British officer for his neck stock? Probably not. The rivalry between the Livingstons and the DeLancey family was well-known, possibly even bitter enough to merit a smear campaign of this nature.  But maybe it\’s John R.\’s somewhat shady connections, both during the war and after, make him vulnerable to a story like this.